As consider our approach or strategies for evangelism, whether inter-personal, social media, or other forms of communications understanding both the key elements and the process of decision-making can greatly strengthen our initiatives.  These very simple charts and associated Biblical references illustrate the timeless character of these key points.

The Elements of Decision-Making For Change

Illustrations from two ends of the knowledge/motivation/attitude spectrum serve to make the point.

The ruling religious leaders were high in knowledge but de-motivated to consider a new message which threatened their status.  (See also John 7:25-52, John 19:1-16.)

The ragged, broken, socially ostracized leper and one of the criminals on the cross would appear to have minimal knowledge (compared, say, to the Pharisees/Sadducees) but sufficient knowledge combined with high motivation to create an openness to Jesus’ transforming power.

Nicodemus and Jairus are classic illustrations of well-defined attitudes change based on changing knowledge and/or circumstances which affect motivation.

The Process of Decision-Making For Change

Biblical content and sociological research (truth is always God’s truth) make clear that decision-making for change is always a process.  This, of course, relates to Section 1, Evangelism: A Process Or Event?  The key elements are:

Note: Classically these first three steps are an on-going loop which moves on to the next stage only when there is sufficient motivation.  In consideration/acceptance of Jesus, this loop may appear to be comparatively short, as in the case of children.  Or, lengthy, as in the case of those who make a decision for Christ later in life.

Consider the relationship of the diagram below and that found in Section 3.  This suggests that for spiritual movement of an individual upward along the diagonal line in diagram 3, from antagonism or indifference to belief, the process shown in the diagram below must occur. 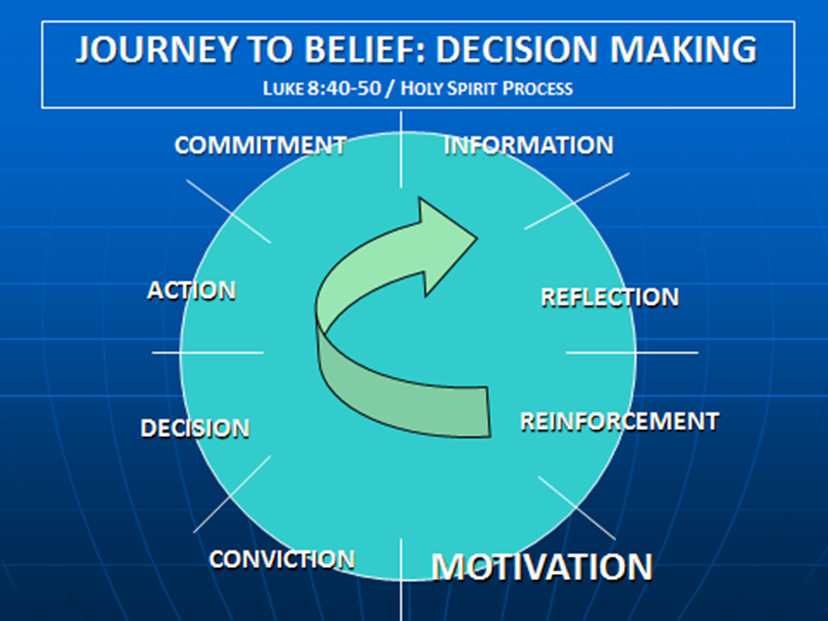 Consider two of the cases previously mentioned; Nicodemus and Jairus.

Nicodemus appears in John 3 bringing parallel sets of information: the traditional information rooted in his Jewish religious leader’s training; and, the new information rising out of his own observation of Jesus life & ministry and, likely, the rising level of discussion about Jesus both among both his peers and the general public with whom he mixed.  We see the distinct passage of Nicodemus’ process along this continuum of conviction and commitment as he: first, comes to Jesus by night – afraid of his peers; then, advocating on Jesus behalf with his peers and suffering their ridicule; finally, his public affirmation as he joins with Joseph of Arimathea to take Jesus body from the cross and place it in the tomb.

Jairus has a 12 year old daughter who is dying.  Desperate he falls to his knees in front of Jesus and begs for help.  In character, Jesus responds and the girls is healed – in fact, brought back from the dead!  The context is as follows.  Jairus was a religious leader in Jesus’ adopted home town of Capernaum.  His connections with the religious establishment in Jerusalem would have been evident.  As a leader of the synagogue where Jesus’ regularly taught (Mark 1), Jairus had an up-close view of the spectacular trajectory of Jesus’ ministry.  Jairus also knew Jesus’ disciples since we know this was Peter’s home town.  His call on Jesus occured well into Jesus’ ministry – possibly even in the final few months.  Based on the state of the girl’s condition when Jairus sought out Jesus, he had tried every other possible option before, in desperation, turning to Jesus, at 11:59, as the court of last resort.  Jairus represents a classic case history in which, in a comparatively short period of time, we can clearly see the progression of the elements outlined in the diagram above.  He had a rich data base of traditional Jewish religious assumptions.  He had an in-depth exposure to Jesus’ ministry.  Despite the compelling evidence which Jairus regularly saw, the personal ‘risk/reward’ balance was insufficient to motivate turning his back on his religious peers and threaten his social standing.  But even compelling information was insufficient to motivate his change.  Only when his perceived need became sufficiently acute was he prepared to, in front of his own ‘parishioners,’ in total humility (remember, this is an eastern culture) fall begging to the ground in front of Jesus in the middle of the town, in broad daylight.  The potential of personal rewards overwhelmed the potential personal/professional risks.

The audiences of Palestine in Jesus’ day and audiences like the Muslim world of today provide interesting basis for comparison.